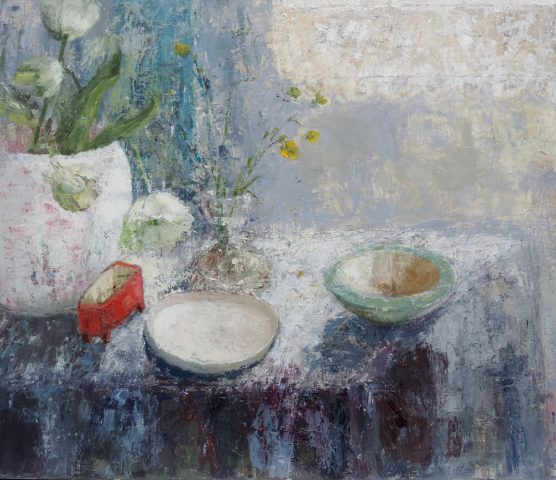 The work of Ellen Watson embodies the elemental forces of the rugged Cornish coastline, with rich textures of oil paint and a palpable creative energy. Taking inspiration from her surroundings and the neighbouring Isles of Scilly, she portrays untamed seascapes and weathered coastal views, focusing mainly on the strength of light and ‘that point of contact between the sky and the horizon’. She uses a sophisticated range of colour, from wholesome bases of earthy tones to gentle shades of blue and green merging with pastel skies. Amongst the energy of paint there is, however, an air of calm, stillness and tranquillity.

Movement is a key word when describing Ellen’s work, as an insight into her practice reveals an engagement with a journey of intuition; she describes her process as ‘a form of travel whereby stuff is revealed and inadvertently uncovered, so in a way a picture is found rather than made’.

Ellen graduated from the Edinburgh College of Art in 1992, going on to work as a Textile Designer until 2002. She has sustained her practice as a painter throughout this time, alongside working in printmaking and ceramics. She now lives and works in Cornwall and exhibits across the South West.